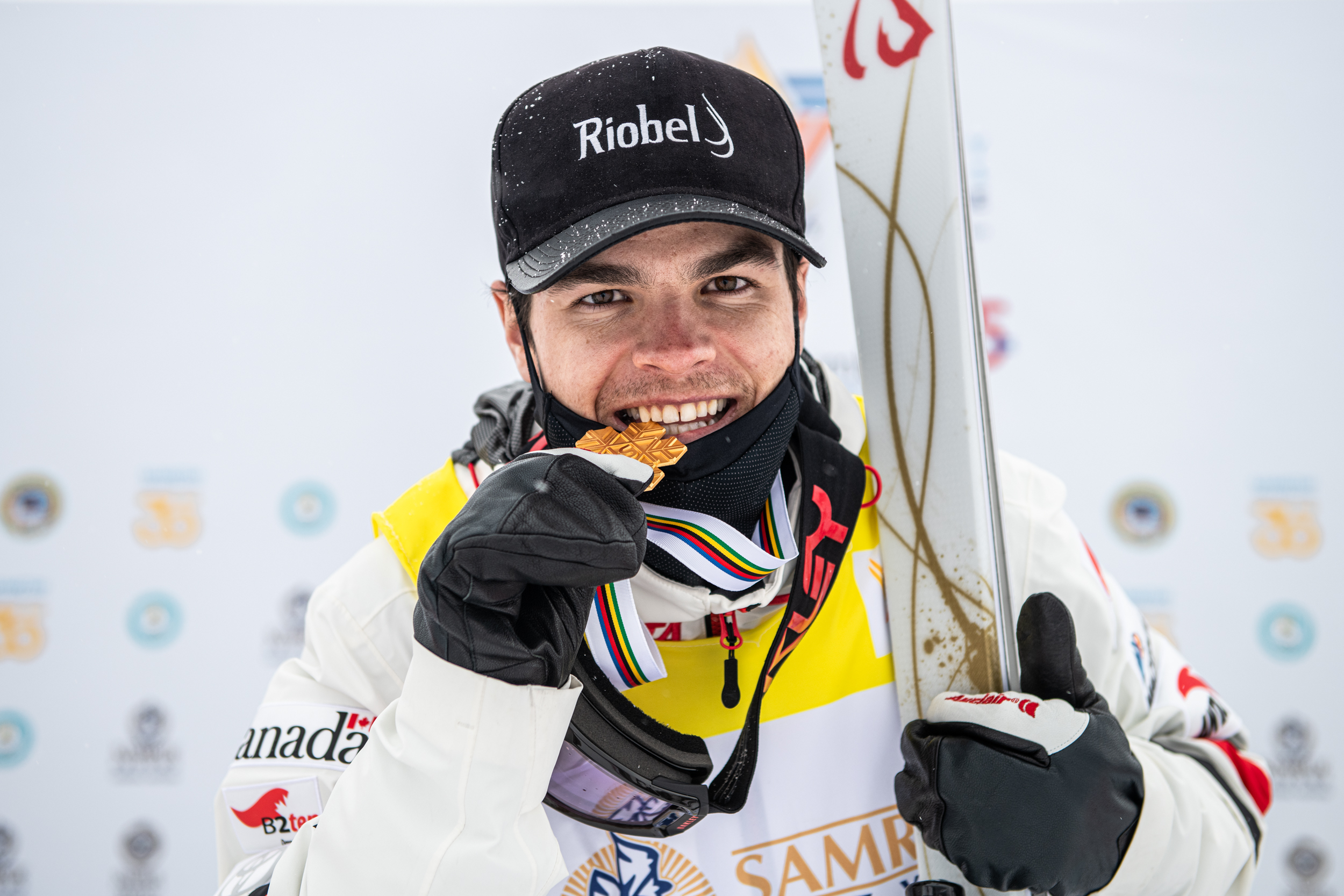 The 28-year-old added to his reign as the most successful moguls skier of all-time by successfully defending his World Championship title with a dominant performance in the super final, scoring 87.36 points.

“This one is extra special for me,” said Kingsbury, who missed the start of the season after fracturing his T4, T5 vertebrae during a training run in December. “My main motivation to get back on my skis after my injury was to be able to compete at my best at World Championships, and that is exactly what happened today. I couldn’t be more proud.”

The best he definitely was despite having to navigate through variable weather conditions and snow.

After qualifying in second spot, the reigning Olympic champion (gold – 2018 Olympics, silver – 2014), was fast and technically sound while rattling off a back, double full in his top air, followed up by an impressive cork 1080 in his bottom air to solidify the victory by 4.93 points over Benjamin Cavet, of France, who placed second at 82.43. Hometown boy, Pavel Kolmakov of Kazakhstan skied to the bronze medal with a score of 82.23.

“Obviously the injury in Ruka affected his training, but during the pre-Worlds training camp, he and head coach Michel Hamelin worked on building day after day to be prepared for today,” said coach, Jim Schiman. “They started slowly, and each day they would increase the intensity and degree of difficulty on the jump to gain comfort and confidence. They applied the same plan here and by the last two final runs he was fully up to speed.”

Kingsbury, who also has two World Championship titles in the duals moguls discipline, has remained unbeaten since his return to the elite circuit in February. He competed in just one World Cup event prior to the World Championships where he completed a golden sweep in Deer Valley, claiming first place in both single and dual moguls.

The Olympic gold and silver medallist has now racked up 10 medals at the premiere freestyle ski competition, consistently stepping onto the podium in the last six-straight World Championships which are held every second year.

Kingsbury was not the only Canadian who impressed in his climb back from injury. Laurent Dumais, who was recently hurt, decided to skip the Deer Valley World Cup stop last month. This helped him come back healthy and ready to mix it up with the world’s best freestylers. The 24-year-old from Quebec City finished in sixth spot with a score of 56.05 in the super final.

“I want to highlight Laurent’s performance. He has put in so much work to compete today, and I’m super proud of him,” added Kingsbury, who credited Dumais for playing a key role in his victory on Monday. “It was nice to have a teammate at the top of the course in the finals. We were able to chat and make jokes, and that helped take some of the pressure off.”

Meanwhile, Justine Dufour-Lapointe was the top Canuck in the women’s singles moguls event in Almaty. The two-time Olympic medallist from Montreal, who has four career World Championship medals on her resume, finished in 12th place with a score of 75.49.

Perrine Laffont, of France, won the women’s event after chalking up a score of 82.11. Kazakhstan’s Yuliya Galysheva racked up 79.52 points to secure the silver medal. Russia’s Anastasiia Smirnova locked up the bronze with a score 79.41.

“My legs are a little tired. It has been a long day, but with a good night’s sleep I will be ready for tomorrow,” said Kingsbury who already has an eye on the key to victory. “My main challenge will be to quickly master the red course – that will be the key to getting ahead of my competitors.”