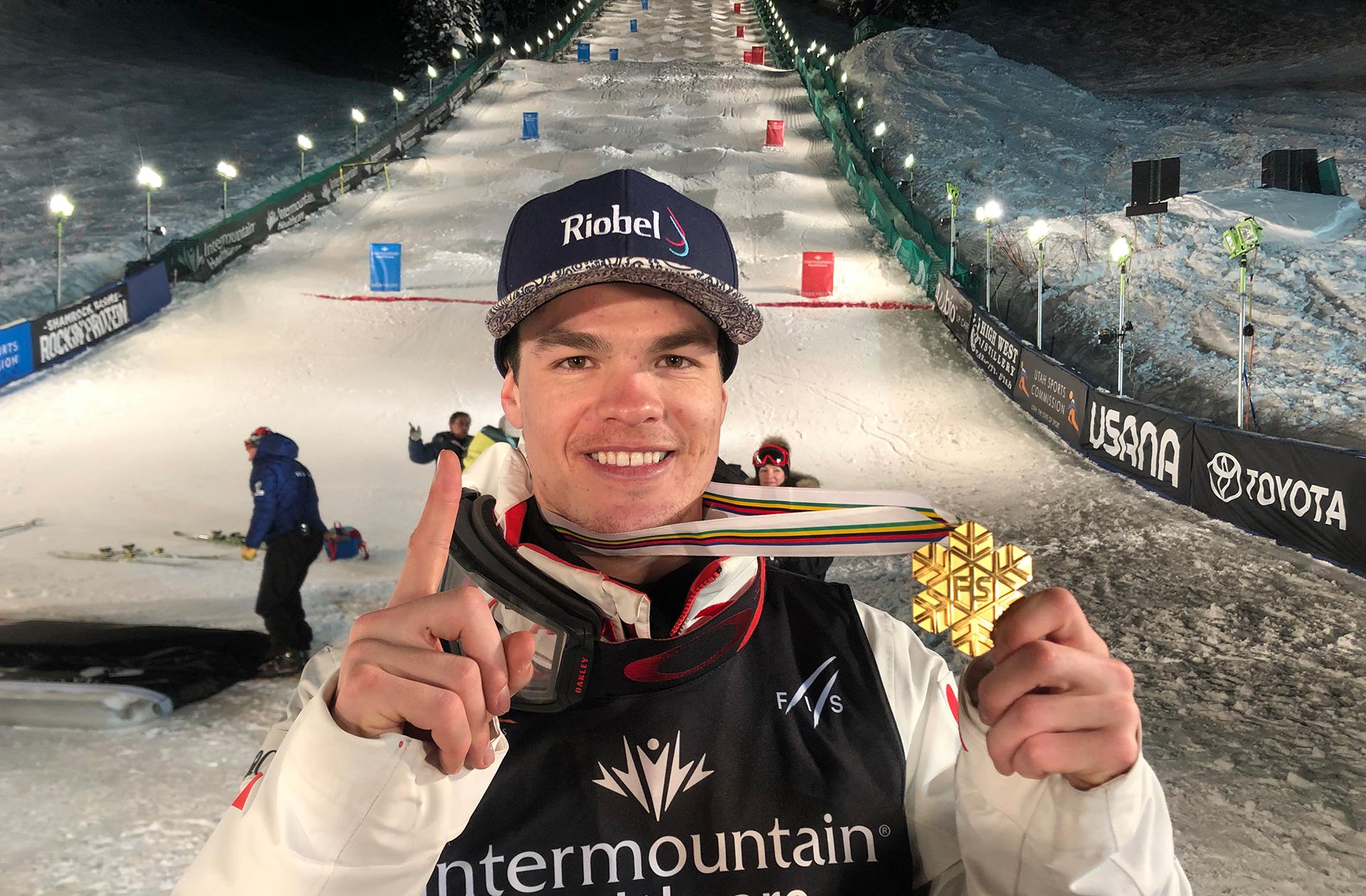 Kingsbury has therefore regained the title he first won at the 2013 World Championships in Voss-Myrkdalen, Norway. His medal on Friday was also his fifth in five World Championship appearances, as he also had won silver in 2015 and bronze in 2017 and 2011 in the moguls singles events.

Kingsbury currently holds the three most prestigious mogul crowns, the other two being the 2018 Olympic champion and the 2017-18 Mogul World Cup champion. And the Deux-Montagnes athlete seems to be on the right track to defend his World Cup title in the 2018-19 overall mogul ranking having won five of six events so far this winter.

The 26-year-old Canadian athlete had the upper hand on Friday with a score of 84.89, beating Australian Matt Graham (81.94) and Japan’s Daichi Hara (81.66). Defending champion Ikuma Horishima of Japan had to settle for fourth place with 81.30 points.

“That title feels good,” said Kingsbury after stepping on the first step of the podium. “At the top of the course before my Super Final run, I felt the pressure to be the last to go, because I didn’t train as I would have liked to this week. But at the same time, I trusted that I could be the best. And it seems that in the end, all the stars aligned”

“It wasn’t perfect, but as the qualifying and finals progressed, it got better and better from one run to the next.”

Philippe Marquis of Quebec City, the other Canadian to reach the final rounds in the men’s competition, took sixth place with a score of 79.50, matching his best career ranking at a World Championship. He had also finished sixth in 2015.

“I feel that the circle is complete, it is the return in strength that I wanted,” said Marquis, who only returned to competition in January this year after a long recovery due to a knee injury, with the aim of going for a final lap this season before retirement.

“I’ve been fighting hard for a year to get back, and to get such a result on this course, the very one that cost me my knee last season, is a sweet revenge. I am so happy… It was worth all the effort to come back!”

Justine Dufour-Lapointe was the best of four Canadians who competed in the women’s final rounds with a fifth place finish with a score of 71.25. This is the first time in four career World Championships that the 24-year-old Montrealer has not reached the podium in the mogul singles event, having won gold in 2015 and bronze in 2017 and 2013.

Still, this is her second best ranking and third top-5 of the 2018-19 season on the world stage, having finished third at the Tremblant World Cup and fifth at the Calgary event.

Most importantly, she successfully completed the new jump she promised herself she would do for the first time this season, and she did so at the “most stressful competition of the season”, as she pointed out.

“One of my goals this season was to add a new jump, a cork, and to successfully complete it, and I finally decided to do it today,” said Dufour-Lapointe, who places a lot of importance on pushing the boundaries of her sport. “For us girls to be competitive, we have to push the limits of our jumps and our speed, and I managed to push my limits today, I’m so proud of myself! The only objective that mattered to me today was to successfully complete my cork and I did.”

Chloé Dufour-Lapointe missed the second final by only 0.50 points, finishing seventh in the first final with a score of 70.13, just behind Russia’s Smirnova Anastasiia (70.63). The 27-year-old Montrealer today achieved her third top-10 at World Championships, having finished ninth in 2017 and eighth in 2013.

Another Canadian making her World debut, Maia Schwinghammer of Saskatoon, SK, earned her place in the final through qualifying, but the 17-year-old injured herself in a fall at the finish line and was unable to pursue.

The World Freestyle Ski Championships will end on Saturday, with the halfpipe and dual moguls events.