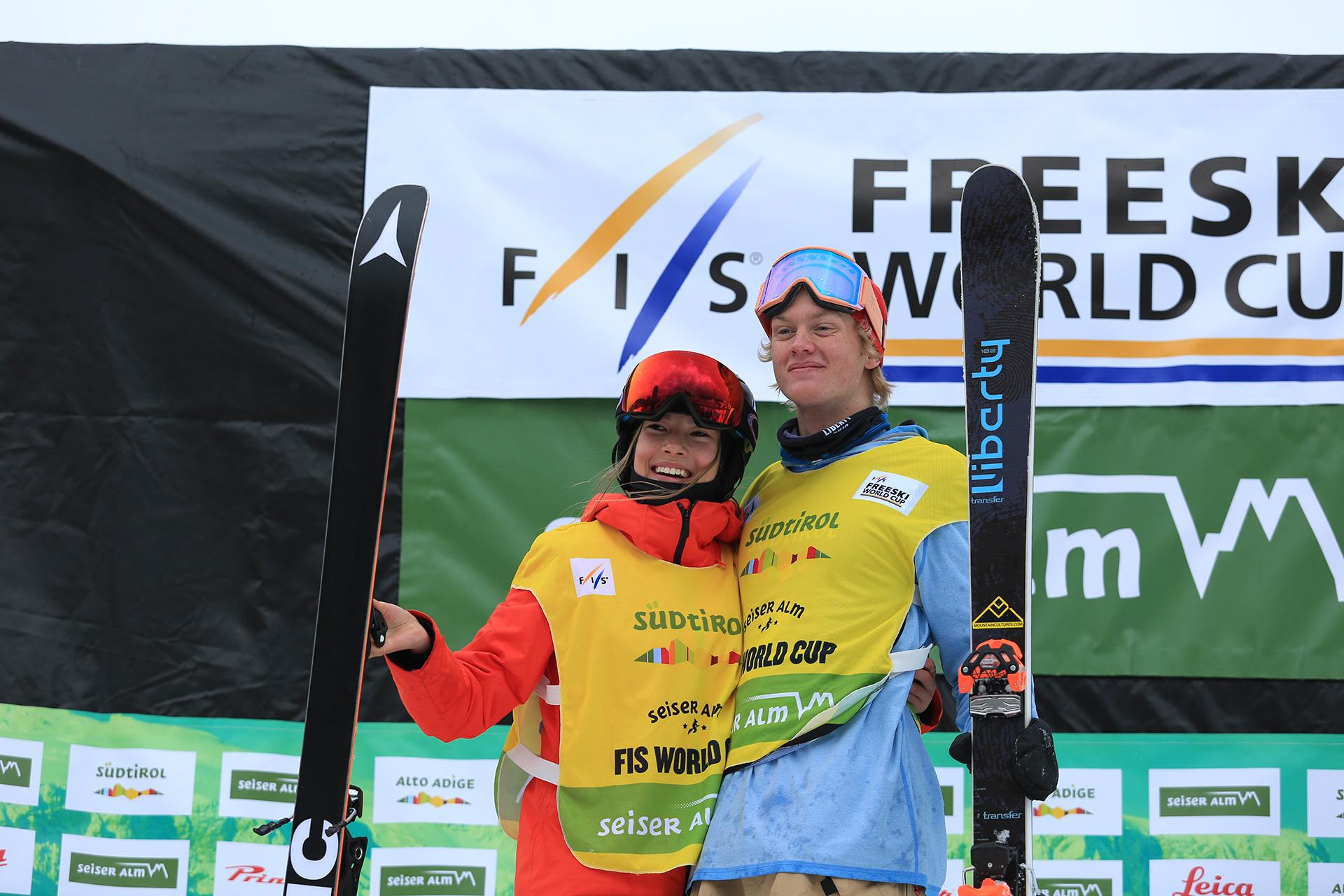 Seiser Alm, Italy, January 27, 2019 – Canadian skiers Max Moffat and Megan Oldham both won the first medals of their careers on the FIS Freestyle Ski World Cup circuit on Sunday, stepping up on the podium after the slopestyle events for men and women, respectively.

Moffat, the 20-year-old native of Caledon, Ontario, took the gold in the men’s event, while Meghan Oldham, 17, of Parry Sound, Ontario, captured the silver for the women.

Moffat earned his victory with a score of 83.10 in his best-of-three final runs, ahead of Swedish competitor Oliwer Magnusson, age 20 (82.35 points) and the 17-year-old American skier Kiernan Fagan (81.00), both of whom are enjoying their first World Cup career podiums.

“It feels a little unreal,” said Moffat afterward. “I just happened to do exactly as planned in the first run, so it was a bit stressful waiting to see what the others would do. In the end, though, it was such a great experience. Words can barely describe it!”

Moffat’s first victory comes after 14 World Cup starts in his disciplines, slopestyle and Big Air. His best slopestyle result until now was 16thplace, which he earned back on January 12 in Font Romeu, France.

“I’ve competed three times here in Italy and have always loved it,” he added. “Today, everything fell into place and gave me this victory. I’m really happy. My dream has always been to do well on the World Cup and in important competitions, and today the dream came true.”

Two other Canadians, both 20, made the top 10: Patrick Dew of Vernon, BC, took eighth place, and Mark Hendrickson of Calgary, AB, finished tenth. With this showing, Dew has achieved his best career ranking on the World Cup circuit, while Hendrickson repeats the 10th-place standing recorded on January 28, 2017, at the first of his career World Cup slopestyle competitions, also in Seiser Alm.

For the women, Oldham snagged her first podium in her third World Cup career event, after a previous ninth-place showing on January 12 in Font Romeu – her best result to date. On Sunday, she scored 83.00, earning her spot just behind the 15-year-old American skier Eileen Gu (84.40), who had finished second in the slopestyle event at Font Romeu in January and the American Julia Krass (77.30).

“It’s been a crazy year, just finding myself on the World Cup circuit is unbelievable. The level of competition is so high, it’s fantastic to be here with the other skiers and do a run that brought me to the podium. I couldn’t ask for more,” said Oldham, who was in provisional first place until Gu skied her last run. “Eileen has an incredible routine, and I congratulate her on a well-deserved win. As for me, I can’t wait until the next event!”

The next World Cup slopestyle event is in Mammoth Mountain, California, from March 6 to 9. It’s the last leg before Quebec City on March 14 to 17. The next competition for the Canadian slopestyle team is the freestyle ski World Championships from February 1 to 9 in Park City, Utah.