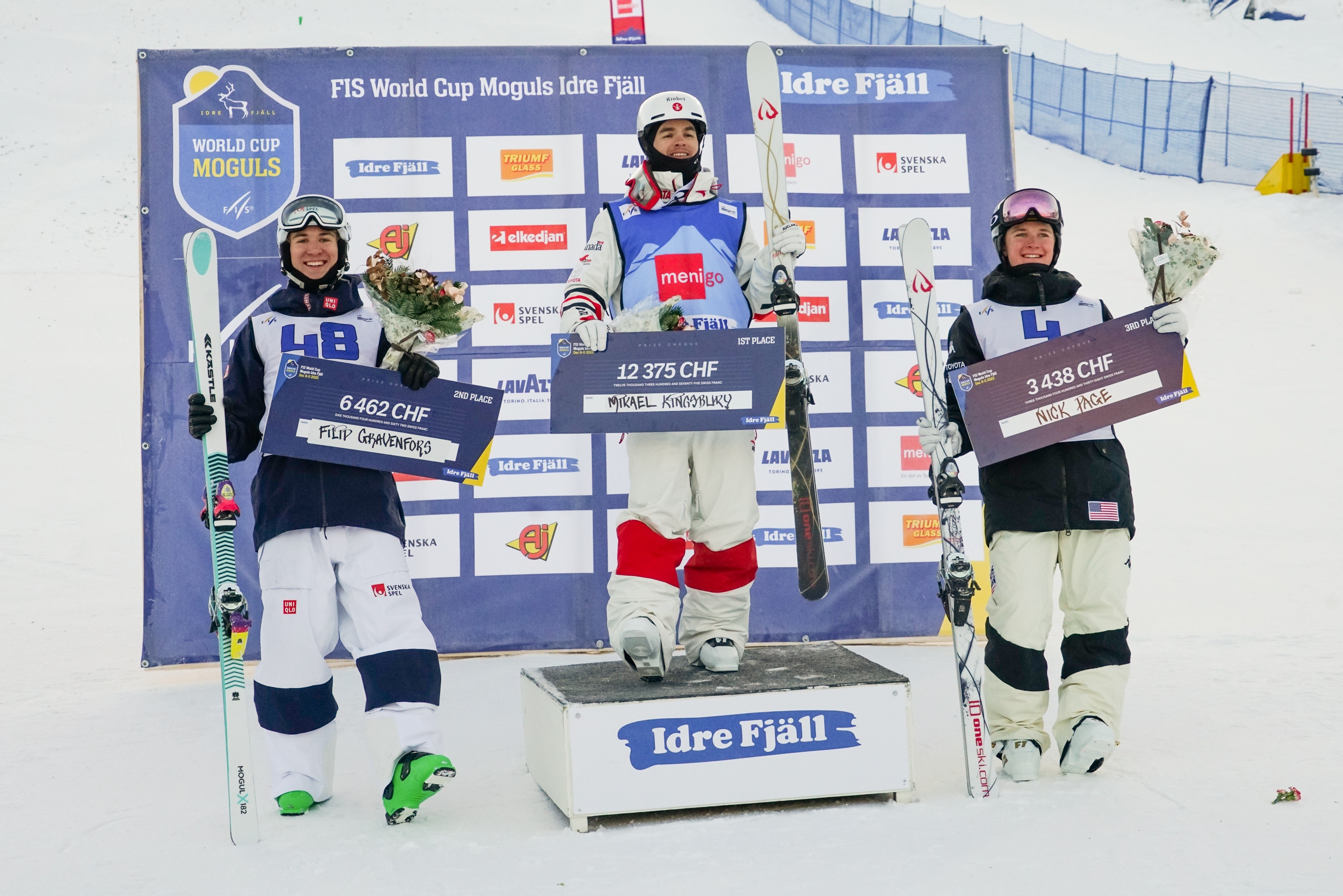 Mikaël Kingsbury needed only twenty-four hours to find his way back to the top of the podium. One day after finishing second in the moguls event, the world champion won the men’s dual moguls contest at the World Cup in Idre Fjäll, Sweden.

Five races, five wins and a 76th World Cup medal! The Québécois began his perfect day by defeating Martin Suire of France, and his compatriot Julien Viel of Mont-Sainte-Anne, QC, who was participating in his first circuit event on Sunday.

He then bested Severi Vierela of Finland and Cole McDonald of the USA to advance to the big final, where he faced young Filip Gravenfors of Sweden in the gold medal contest. It was the tightest race of the competition for the Canadian, who commented on the speed of his opponent, who is only 18 years old.

“He’s really fast! Filip really challenged me. I did well in the middle section, and at one point I couldn’t see him beside me. I really respect what he did,” said Kingsbury.

In fact, Gravenfors was the first to cross the finish line, but the judges awarded more points to the “King of Moguls,” giving him the win. The bronze medal went to Nick Page of the USA, who edged out his countrymate Cole McDonald in the small final.

“It was a bit dicey at times because you pick up a lot of speed in the middle, but kudos to Filip, he’s really fast,” added Kingsbury. “I’m glad to have earned the yellow jersey as the winner of this event. Things are going well so far…two first-place finishes and one second!”

In addition to Kingsbury and Viel (13th), Elliot Vaillancourt of Drummondville also made it to the round of sixteen on Sunday. He was eliminated by Gravenfors and finished 14th, a personal best for him in a World Cup event.

In the women’s event, Maïa Schwinghammer of Saskatchewan and Laurianne Desmarais-Gilbert of Quebec did not advance past the quarter-finals in the first duals event of the season. They finished 17th and 21st.

Elizabeth Lemley of the USA defeated Anri Kawamura of Japan to claim the gold medal, while Perrine Laffont of France earned the third spot on the podium.

The next World Cup event will take place next week in Alpe d’Huez, France.