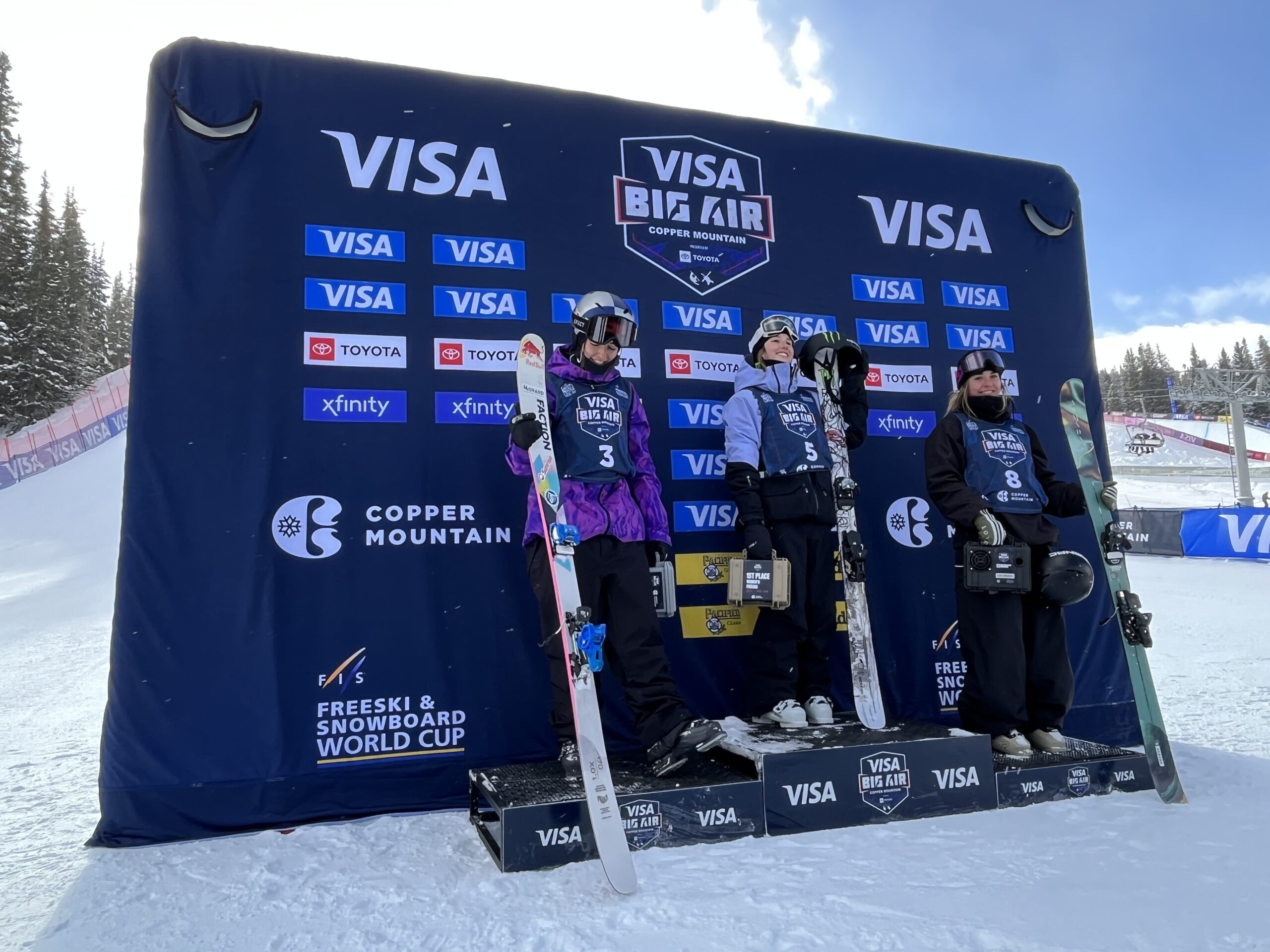 Vancouver, December 16, 2022 – It was a day of firsts for the Canadian team at Copper Mountain! Megan Oldham scored the first Big Air victory of her career, while Olivia Asselin earned her first World Cup medal, with bronze.

Following Wednesday’s qualification rounds in Colorado, Oldham and Asselin held the fifth and sixth provisional spots. Both Canadians performed brilliantly in the final, standing out from the crowd.

Oldham had a strong first descent that earned her 89.00 points, to which she added another 87.00 on her second run.

“I wasn’t expecting it! I was mainly focused on landing my jumps, and I was hoping for good weather, which we got. I’m happy to have ended up with both feet on the podium,” said Oldham, who finished the event with a cumulative total of 176.00 points.

Mathilde Gremaud of Switzerland was the final competitor to attempt to defeat the Canadian. She earned 84.00 points on her final run, racking up a total score of 172.00, which was good for silver.

Because all of her opponents had completed their three jumps before she even began her final descent, Oldham (Parry Sound, Ontario) was assured of victory.

“It was crazy! It was my first-ever ‘victory lap!’ It felt great to be standing at the top, deciding what I wanted to do. I really enjoyed that moment,” added Oldham, who now holds third place in the overall rankings.

Today’s medal was Oldham’s sixth in a World Cup competition, and her first in Big Air.

“Things didn’t go particularly well in training, so my expectations were low, but I landed some great jumps in the final, so I’m really happy!” said Asselin, who decided to pull out all the stops at the end of the competition. The strategy paid off.

“I had never attempted that manoeuvre (switch double 1080 indy) on the snow! If I hadn’t done it, there’s no way I would have made it onto the podium, so I decided to go for it. If I hadn’t landed it, at least I would have tried.”

At the Chur World Cup earlier this season, Asselin finished fourth in the Big Air event, just points away from a medal. Now that she’s gotten a taste of glory alongside her teammate Oldham, she hopes to be back on the podium soon.

Rylee Hackler of Calgary finished 14th in the qualifiers.

For the second weekend in a row, Mikaël Kingsbury stood on the second step of the podium in the men’s single moguls competition at the freestyle skiing World Cup. On Friday, at the French ski resort of Alpe d’Huez, the Olympic silver medallist in the same event scored 80.85 points to finish just behind Ikuma Horishima of Japan (82.66 points). The bronze medal was awarded to Cole MacDonald of the USA (75.17).

Kingsbury, who came out of the first final in third place, hoped to regain some ground with his ultimate run. “I’m really happy with the way I bounced back from the first final. […] I had a feeling I’d be able to be more precise in both my jumps and my skiing, which I was. When crossed the finish line, I felt good,” he explained.

The skier from Deux-Montagnes, Quebec, had a great run in the second final. However, he was not quite as fast as Horishima, who picked up 16.40 points for speed, as opposed to 15.29 for Kingsbury. Horishima momentarily lost his balance early in the run, but was able to make up for it on his second jump.

“Watching Horishima go, I knew it was over. I’m more disappointed about the difference between our scores than I am about the fact that he beat me. He had an excellent run,” added Kingsbury.

Kingsbury, who also finished second in the individual event last week at Idre Fjäll, Sweden, remains the World Cup leader with 260 points so far this season, allowing him to retain the yellow jersey. Horishima is in second place, with 230 points.

Gabriel Dufresne (Joliette, Quebec) advanced to the first final and ended his day in ninth place.

Alexandre Lavoie (Quebec City, Quebec) finished the qualifiers in 17th place, just one position away from a spot in the first final.

In the women’s event, Saskatchewan’s Maïa Schwinghammer had the best finish for a Canadian, with 11th place. Laurianne Desmarais-Gilbert of Sainte-Adèle, Quebec, finished 22nd.

The action will continue on Saturday at Alpe d’Huez with the dual moguls event.