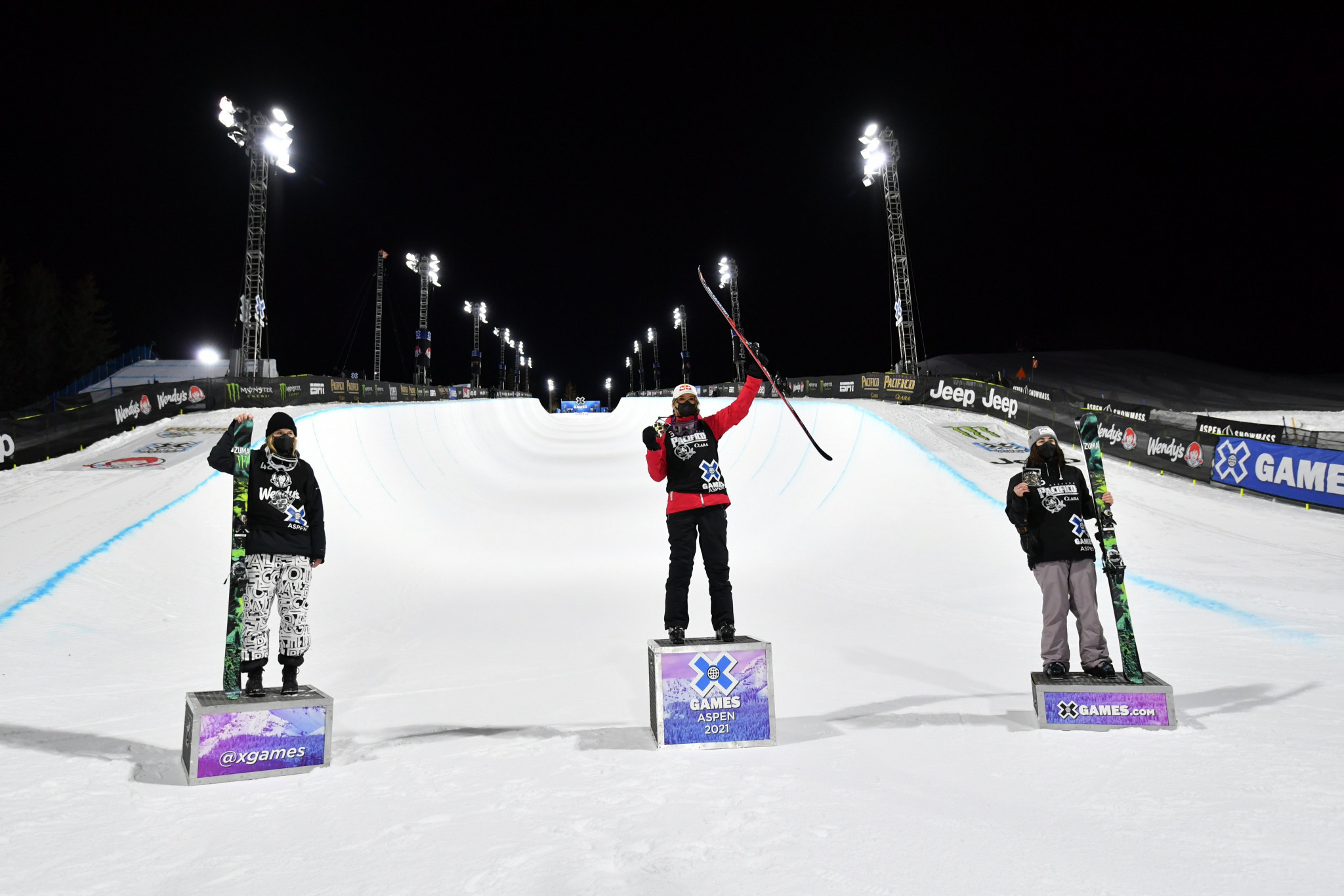 Aspen, Colorado – January 29-31, 2021: X Games made its return this past weekend showcasing the best freeskiers in the world, but in a different way than we are used to. With no spectators, we got the opportunity to indulge in a weekend full of exciting freeskiing action from the comfort of our homes and our screens. It has been a tricky year for our athletes who were faced with competition cancellations and a limited amount of training. With the immense effort from the event organizers with a strong focus on the athlete’s safety and COVID-19 protocols, we were able to cheer on eight invited Canadian athletes from home.

The weekend kicked off with women’s big air on an overcast day with challenging flat light conditions. This didn’t stop our only female big air competitor, Meghan Oldham, from putting down two big jumps. The big air, like the rest of the weekend’s events, was a jam session format. In this instance, the two best jumps counted towards a combined score of 100. Oldham was able to land a clean switch 1080 mute and a double cork 1260 that gave her a total score of 77. This propelled Oldham to second place, behind Swiss skier Mathilde Gremaud who landed the first switch double 1440 in female big air history and scored a total of 91.

Following up the big air event, it was time for the women’s superpipe. This year’s field of competitors was a mix of seasoned vets and rookies that made for an entertaining event to watch. The athletes had 25 minutes to land their best run in hopes to claim a podium spot. To say the least, it was a successful evening for our two Canadian athletes, Cassie Sharpe and Rachael Karker, who skied consistently throughout the night. Karker showcased her signature smooth style with back-to-back left and right 900’s which earned her a bronze medal. Sharpe put down a solid run which placed her in 2nd, spinning all different directions and stomping a 1080 on her last hit. Sharpe wasn’t quite done yet, pushing the sport has always been a top priority for the 28-year-old Olympic champion. With her eyes on the prize of re-claiming the top podium spot, Sharpe came out of the gate to put down her first-ever 1260 in competition. This was by far the biggest trick of the night, however, it was not enough to beat X Games rookie and young gun Eileen Gu who claimed gold.

The evening was not quite over yet, with the first men’s ski event of the weekend being superpipe. Noah Bowman and Brendan Mackay were the two skiers representing Canada against a field of heavy hitters. Bowman had a few podium-worthy segments showcasing his impressive switch hits but unfortunately was unable to link a full run together. Mackay came to Aspen as a first alternate, although given the opportunity to compete with New Zealand’s Beau-James Wells dropping out due to an injury. Mackay put down quite the show with a run full of amplitude and four different doubles, proving why he deserves an invite at future X Games events by just missing the podium finishing 4th.

After an eventful first day of competition, day two started with women’s slopestyle and our lone female competitor Megan Oldham winning her second medal of the weekend. The conditions were similar to the day prior’s big air event and made for a challenging course. After putting down a clean run early to help set the bar for the rest of the field, Oldham dealt with some speed issues for the rest of the jam and could not improve her ranking. Oldham kept pushing her skiing where she could, throwing down a huge switch 900 on the shark fin feature during one of her final runs. Oldham’s clean run early on displaying a technical rail section and a series of smooth airs earned her a bronze medal behind Eileen Gu (1st) and Isabel Atkin (2nd).

With the sun fully set over the Aspen mountainscapes, the lights turned on the big air jump where we got to witness Alex Beaulieu-Marchand and Evan McEachran face six of the other best freeskiers in the world. Both Canadians finished middle of the pack, just falling short of a podium spot. Throughout the jam format, the athletes were able to fit in six runs, with the best two counting towards a final score out of 100. McEachran’s best two tricks of the night were a switch double 1800 leading tail grab followed by a switch triple 1620 mute, landing both tricks as if he never left the ground. This scored a total of 86 points landing the Ontario skier in fifth. Alex Beaulieu-Marchand stomped a series of triples, one of them being a 1440 octo grab to reverse octo grab which was almost impossible for the viewers to comprehend. Beaulieu-Marchand finished the night in fourth behind Andri Ragettli (1st), Antoine Adelisse (2nd) and Alex Hall (3rd).

For the final day of the weekend, we saw Alex Beaulieu-Marchand and Evan McEachran take on the slopestyle course for their second event of the weekend. The men’s slopestyle skiers were blessed with near-perfect conditions with the sun shining on the course providing ideal visibility. This worked in McEachran’s favour who put down an impressive run showcasing his signature technical rail skiing and four different doubles spinning in all different directions earning a bronze medal, his second X Games medal in two years. Beaulieu-Marchand, who was dealing with back pains the entire week, did not hold himself back throughout the day. The X Games veteran skied extremely well showcasing 1-foot slide tricks on each rail and landing four-way doubles, just missing the podium again coming in fourth.