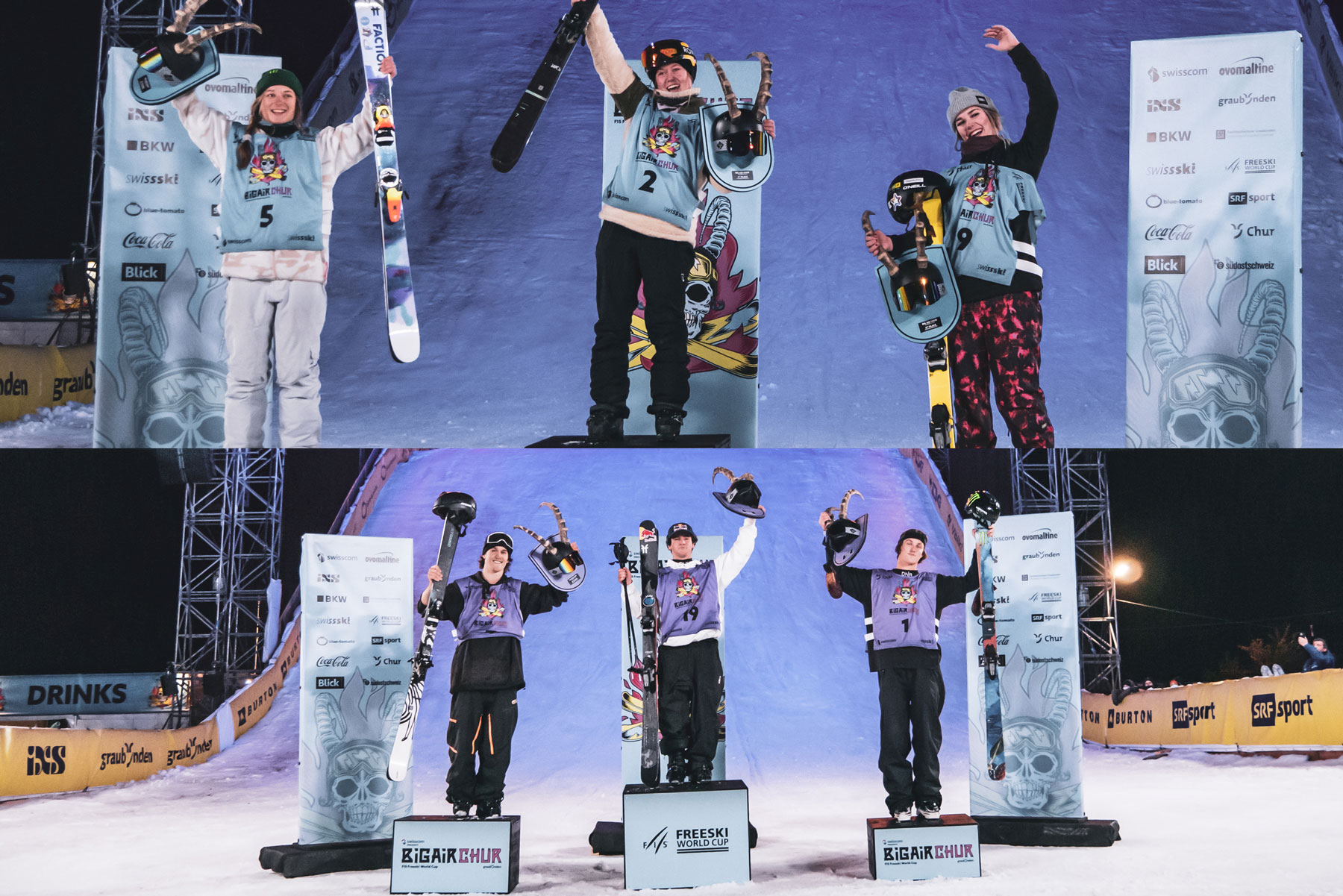 What a start for the Canadian team! Teal Harle and Elena Gaskell both climbed onto the Big Air Festival podium at the first freestyle skiing World Cup of the season on Friday in Chur, Switzerland. Harle earned the silver medal in the men’s competition, while Gaskell captured bronze in the women’s.

For Gaskell, it was an outstanding return to competition.

Ranked fourth after the women’s qualifiers, she scored 91.00 points with her first jump of the final round—a switch bio 1080 mute grab—to take the lead. When Gaskell’s score was announced, her teammate Megan Oldham of Parry Sound, ON—who was also competing in the final—jumped into her arms.

In the second run, Tess Ledeux of France received 95.25 points and Sarah Hoefflin of Switzerland earned 93.25. Gaskell was unable to top her 91.00 points and finished with a bronze medal. It was her fourth career World Cup medal.

“I’m just really happy. To get back to competing and make it to the podium makes me really proud. I wasn’t expecting it, and it’s such a great motivator for the rest of the Olympic season. I’m glad it started off this way,” said the skier from Vernon, BC.

Gaskell was making her comeback more than a year and a half after undergoing knee surgery and breaking her wrist.

“It’s a great comeback! I couldn’t have asked for better. My expectations were pretty low, but I did want to make the final. To make it to the podium is just incredible!”

The athletes were treated to a supercharged atmosphere in Switzerland to kick off the 2021-2022 season.

“To have thousands of spectators watching, it was crazy. There were fireworks and light shows. But during the competition, you get into your zone and you focus on what you have to do,” she added.

Oldham, who was in fifth place after the qualifying round, lost her balance on both jumps in the final. She earned 55.25 points in her second run for an eighth-place finish.

Olivia Asselin (Lévis, QC) did not get past 24th place in Friday’s qualifiers.

Later in the day, Harle (Campbell River, BC) was joined by teammates Max Moffatt(Caledon, ON) and Evan McEachran (Oakville, ON) in the men’s final. Like most of the competitors in the final round, all three skiers fell during their first attempts. In his second run, Harle recovered well with a triple 1260 safety pulled back from 1440, earning an impressive 98.00 points to take the lead.

“I feel great! I learned that move last week and hoped I’d be able to land it at this competition,” he said.

However, Austria’s Matej Svancer, the last athlete to start, topped out with a score of 99.00 points, relegating Harle to second place. Norway’s Birk Ruud finished third with 97.25 points.

“I was surprised at first! I thought I would win, but the judges decide which jump is the best. I’m glad I landed mine. A silver medal is great.”

Today’s medal was Harle’s sixth in a World Cup competition and his third in Big Air. His last appearance on the podium was at the World Cup in Atlanta in December 2019, where he won bronze in the same event.

After taking a tumble during his first run of the qualifier, Harle earned the highest score of the round with 97.50 points on his second attempt. The second heat of the men’s qualification round was delayed due to high winds.

The next freestyle skiing World Cup will take place in Austria on November 19 and 20.