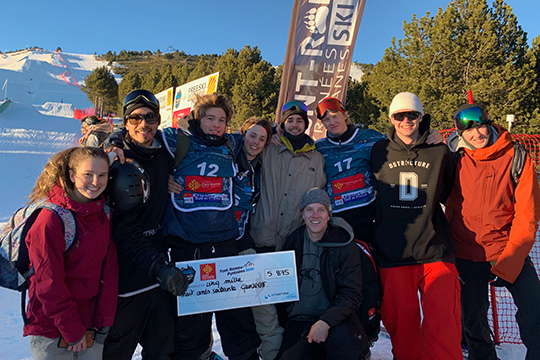 Langevin, from Mont-Tremblant, Quebec, skied to a score of 90.27 in his second run of the final, after collecting a total of 87.63 points in his first run. He was the only finalist to reach the 90-point mark aside from the winner, Alexander Hall of the United States (92.11). Switzerland’s Andri Ragettli followed in third place (89.06).

Langevin’s best career result in eight previous slopestyle events had been a 10th-place finish on November 23, earlier this season in Stubai, Austria. He is presently taking part in his second season on the World Cup circuit.

“I can’t believe it, it’s insane! I wasn’t expecting this to come so fast, so I’m super stoked,” said Langevin. “I felt really good out there, I was able to do what I had set out to do, so that’s a good sign for upcoming races. The key, now, will be to recreate that as often as possible and to be as consistent as possible.”

Another Canadian came up with a top-10 result in the men’s slopestyle, Saturday, as Max Moffatt of Caledon, Ontario, finished sixth with 81.12 points. That was the 20-year-old athlete’s second career top-10 finish, and his personal best, after he came up with eighth place in Silvaplana, Switzerland on March 3, 2018. He also finished sixth in a Big Air race on March 24, 2018, in Quebec City.

On the women’s side, Megan Oldham collected her first career top-10 result at her second-ever race on the World Cup circuit, Saturday, when she took ninth place with 52.11 points in an event that was won by Switzerland’s Sarah Hoefflin (78.52). The 17-year-old Canadian from Parry Sound, Ontario, was 19th in the slopestyle event held on November 23 in Stubai, en Austria, earlier this season, in her World Cup debut.

The next slopestyle event at the FIS Freestyle Ski World Cup will take place January 25-27 in Seiseralm, Italy.