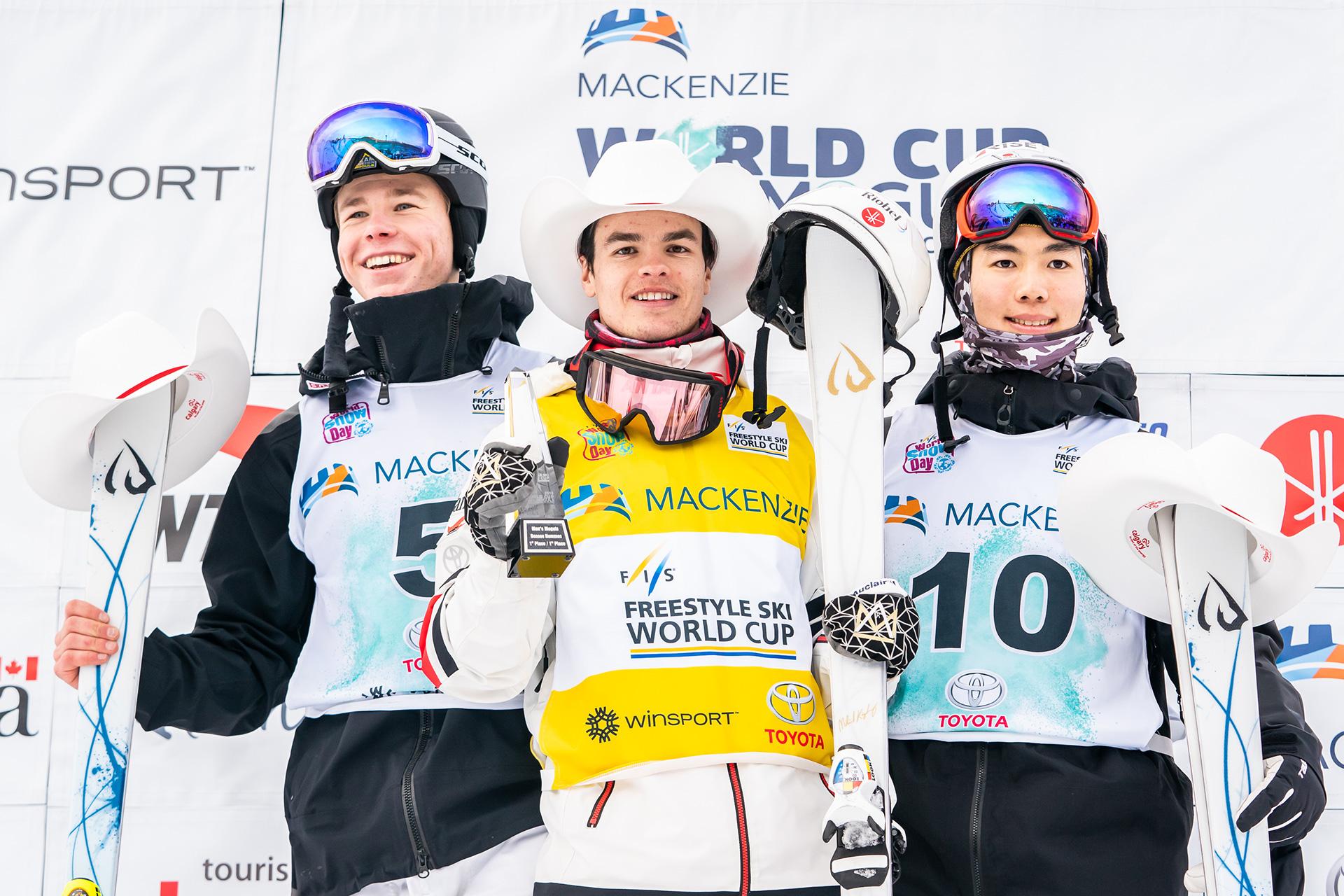 Calgary, January 12, 2019 – Mikaël Kingsbury’s string of success on Alberta soil as well as since the start of the 2018-19 season continued on, Saturday, as the athlete from Deux-Montagnes, QC, won the men’s moguls event held as part of the 2019 Mackenzie FIS Freestyle Ski World Cup presented by Toyota in front of a partisan crowd at Calgary Olympic Park.

Kingsbury came in first with 84.17 points, allowing him to finish ahead of Sweden’s Walter Wallberg (80.98) and Japan’s Daichi Hara (78.14). The Canadian athlete took win number four for four this season on the World Cup circuit and reached the podium for the ninth year in a row in Calgary. This is the moguls’ king 53rd career World Cup win.

“Things turned out to be a little easier for me today, because some guys got caught up going down the slope over the two finals. But I still went with my hardest trick of the day in the second final,” said Kingsbury. “When I saw (in the second final) that nobody had done something outstanding before me, and that Benjamin (Clavet) pulled out, I decided to go with a copy paste of my first final and that’s I was able to do, which earned about the same score. Still, it wasn’t easy today because it was warm and the snow texture kept changing, and that’s why some guys had a tough time.”

Kingsbury’s usual rivals came out short today, as France’s Benjamin Clavet had to settle for fifth place and Kazakhstan’s Dimitriy Reikherd for 11th place, while Japan’s Ikuma Horishima, the only skier able to beat Kingsbury last season, was 14th. Australia’s Matt Graham, who beat the Canadian in Calgary in 2017, came in fourth.

“I’m four for four, so it’s a good start to the season, and it’s good because it gives me a chance to pull ahead in overall standings,” noted Kingsbury. “But the best part is that I’m feeling better and better on my skis, which is cool.”

The other Canadian who reached the final rounds, Laurent Dumais of Quebec City, was 10th with 75.50 points, coming up with his second top-10 result of the season in single moguls. He also finished 10th in dual moguls, on December 16 in Thaiwoo, China.

Philippe Marquis, who was back on the World Cup circuit for the first time since January 2018 after undergoing surgery to the right knee following the PyeongChang Olympic Games, finished 18th in Friday’s qualifying round. The Quebec City athlete came close to qualifying for the finals in a 14th straight event, but his streak was stopped at 13 instead.

“I didn’t make it to the finals, something which hadn’t happened in a while, but I’m proud of what I’ve accomplished, considering how little I’ve been able to train so far,” said Marquis after the qualification round. “This was a very, very good test for me.”

On the women’s side, Justine Dufour-Lapointe saw her streak of consecutive podium finishes in Calgary come to an end at seven, as she had to settle for fifth place, Saturday, with a total of 73.43 points, which left her less than 10 points away from the winner, Kazakhstan’s Yulia Galysheva (79.10). Fifth is still Dufour-Lapointe’s best result and second top-10 this season, as the 24-year-old Montrealer took sixth place in Ruka, Finland, at this season’s first World Cup stage.

“When we look at my results in Calgary these past years, we can say that coming in fifth here today isn’t as good as I expected. But at the same time, considering the pain in my right shoulder I had to deal with this week, fifth is better than I was expecting,” said Justine Dufour-Lapointe. “For me, this was something relatively new to have to ski in spite of pain, to feel that pain everytime I hit a mogul, and it was quite a mental challenge. But the crowd here in Calgary gave me the strength to give it my all, and I battled. I was able to put the pain aside and go all out, and that’s what I’m most proud of today.”

Making her World Cup debut, Maia Schwinghammer of Saskatoon, SK, qualified for the finale rounds. The 17-year-old athlete was 11th with a score of 72.37 points, three ranks behind Chloé Dufour-Lapointe (73.09), whose eighth place allowed her to come up with her third straight top-10 result this season.

Sofiane Gagnon from Whistler, BC, came up with her best result this season, 13th place (67.98). The 19-year-old athlete had finished 18th in each of her three races this season.

The next World Cup events in moguls will take place on Friday, January 18 in Lake Placid, NY,  USA, and on Saturday, January 26 in Mont-Tremblant, Quebec.

“My goal is to bet better and better with each race, to build some momentum for early February and the World Championships in Deer Valley,” added Kingsbury. “And now we’re off to the Eastern side of the continent, it’s going to be a fun part of the schedule.”

As a top-level partner of Freestyle Ski Canada, Toyota Canada is pleased to act as presenting sponsor of the FIS World Cup in Calgary. The sponsorship is part of a multi-year agreement in which Toyota Canada supports elite athletes and their respective national teams and contributes to the development of various community sport initiatives.