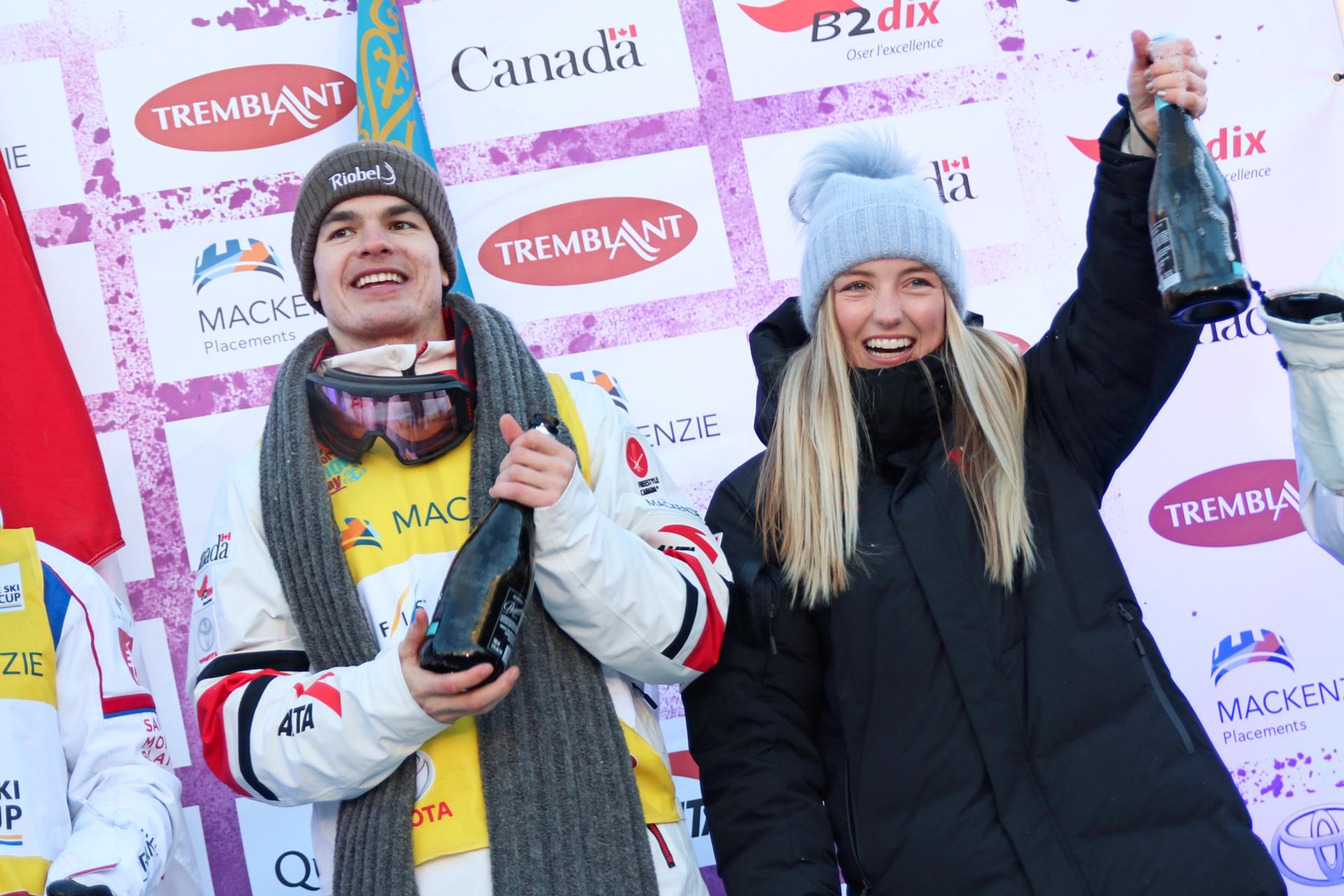 Mont-Tremblant, QC, January 26, 2019 – Mikaël Kingsbury was back on the podium today at the Mackenzie Investments Moguls World Cup Presented by Toyota in Tremblant, while Justine Dufour-Lapointe won the bronze medal, finishing one place ahead of her sister, Chloé, for the women.

Kingsbury had a score of 86.73 in the super final, placing him ahead of his Japanese opponent Ikuma Horishima (85.02) and Kazakh skier Dmitriy Reikherd (83.42). The defending World Cup champion found this moment all the sweeter for edging out Horishima, who took the gold in the moguls event last year in Tremblant, forcing the Deux-Montagnes native to settle for a second-place showing.

“I’m relieved,” said Kingsbury. “I had some trouble on the course during training this week, I wasn’t able to train as much as I would have liked to; and although I skied okay, it led me to make mistakes in my choice of line, which doesn’t usually happen to me. Still, I was able to hold up my end quite well, and even though it wasn’t the best race of my career, it was enough for the win.”

Indeed, Kingsbury redeemed himself today after last week’s fifth-place finish in Lake Placid, in a rare career competition that didn’t end with him on the podium. The 26-year-old Canadian thus continued, this Saturday, a habit he has stuck with since his second season on the FIS World Cup circuit: he has never skied in two consecutive races without winning a medal. Since the 2010-11 season, he has missed the podium 12 times, and 12 times he’s come back with a medal in the very next race, including today’s in Tremblant.

“I feel optimistic looking ahead to the World Championships,” he said. “I just need to fine-tune a couple of aspects of my run and expect to do well on a course that suits me. That will be the most important moment in my season, because the Worlds are the most important competition, after the Olympic Games.”

Philippe Marquis finished ninth today, getting his second top 10 ranking in three World Cup races since coming back to the slopes in January after surgery to his right knee after the PyeongChang Games. The Quebec City athlete finished eighth last week in Lake Placid.

“After Lake Placid, we said that if we didn’t add a new jump, I’d work on my speed, and today I was able to indulge in that on this beautiful course under perfect conditions,” said Marquis. “I also added more amplitude to my jumps.”

The 29-year-old moguls athlete, who intends to retire at the end of the season, said he loved his appearance in Tremblant.

“It was an honour to be here and compete with the other athletes, especially after being on the other side of the fence last year,” Marquis added. “I put on a good performance, another top 10, and was able to greet the crowd. That really felt good!”

For his part, Laurent Dumais of Quebec City finished 10th, earning his third top 10 in six contests this season and his second on Canadian soil, having achieved 10thplace in Calgary last January 12.

An important – an emotional – medal

On the women’s side, Justine Dufour-Lapointe came away with a bronze medal and a score of 73.67. She shared the podium with French skier Perrine Laffont (75.51) and Jakara Anthony of Australia (75.08), who hold the first and second places respectively in the moguls standings thus far in the 2018-19 season.

“This medal win comes with so many emotions. It is an honour to be here with everyone who came to see us. It feels great to see so many people turn out for the event again this year and show us how enthusiastic they are,” said the bronze medallist.

With today’s race, Justine Dufour-Lapointe has made the podium for the second consecutive year in Tremblant (having won the event last year). The 24-year-old Montrealer marked her 14thcareer podium on Canadian soil and her 43rdin all on the FIS World Cup circuit.

Today’s result earned her her first World Cup medal of the 2018-19 season. Her last podium showing goes back to last March 18 in Megève, France, when she also finished third.

“This third place today means a lot to me, because it was the last chance to rack up points before the World Championships, so the last chance to get a lower-number bib ahead of the Worlds, and to enter the event under better conditions,” she noted.

Her sister Chloé Dufour-Lapointe, for her part, finished fourth with 72.23, her best result this season in World Cup competition. She was in provisional third place until France’s Laffont, the last to ski, laid down her winning run. Chloé, 27, has nonetheless improved her Tremblant record by two spots over last year’s sixth-place ranking.

“The difference might have been that second I needed on the timer, but I was sort of expecting third place to slip away from me,” said Chloé. “But the main thing is that I did well, I felt confident, I gave my all. My jumps were good, my turns, too. So far, the season is going the way I want it to.”

Sofiane Gagnon of Whistler, BC finished eighth, repeating her best result of the 2018-19 season. She finished eighth last week in Lake Placid, as well.

Maia Schwinghammer of Saskatoon, SK made the finals for the third time in three career World Cup races to date. She finished in 15thplace today.

The next World Cup moguls event is in Tazawako, Japan, on February 23 and 24 — the penultimate event of the 2018-19 season. The next time the Canadian moguls skiers compete, however, will be at the Freestyle Ski World Championships, which take place February 1 to 9 in Park City, Utah.