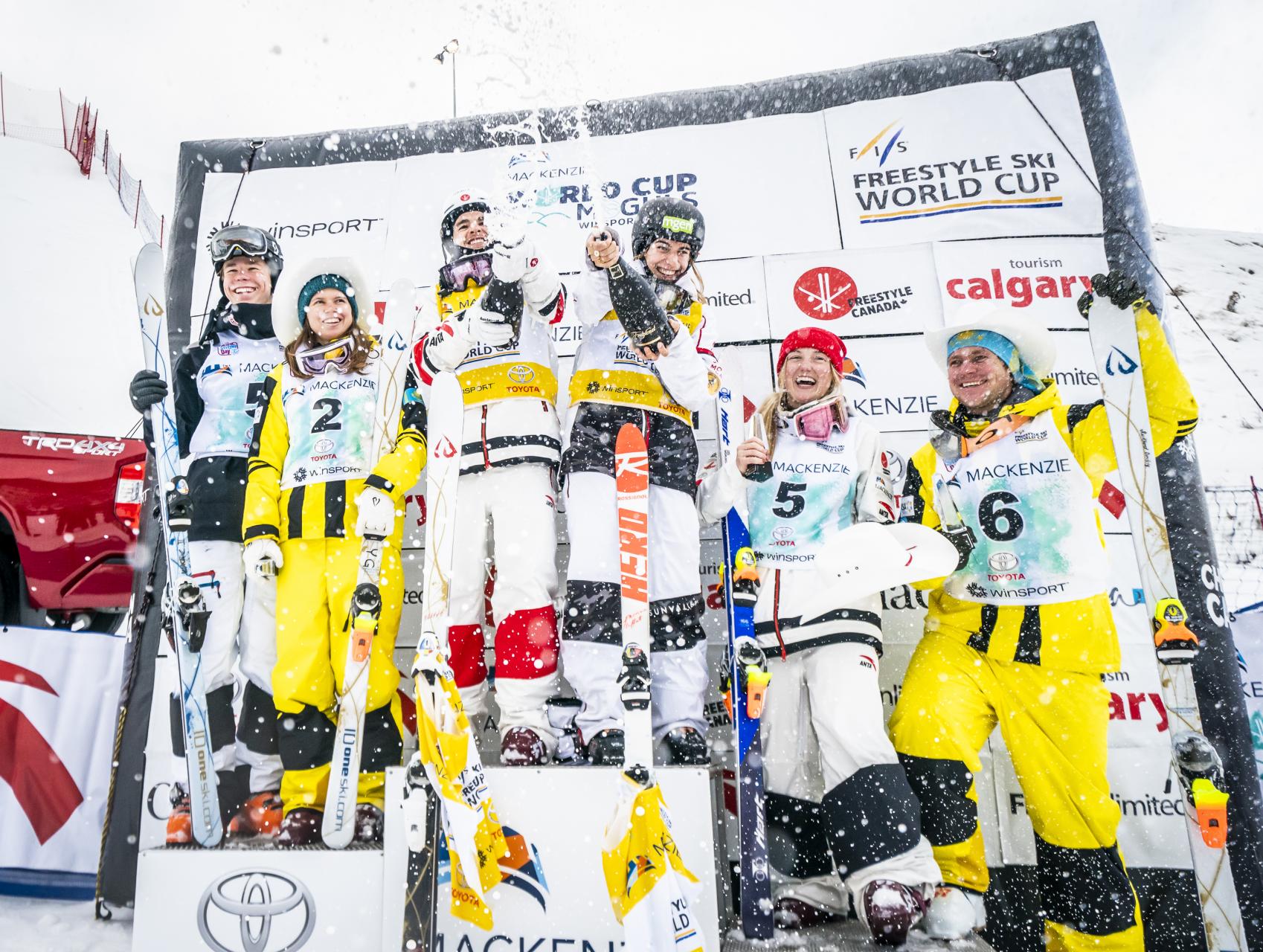 Calgary, Alberta, February 1st, 2020 – Competition has wrapped up in Calgary at the 2020 Mackenzie FIS Freestyle World Cup presented by Toyota, with Canadian athletes displaying impressive performances. Justine Dufour-Lapointe took the aggressive tack on the way to a 3rd place finish, her first podium for the season. The double Olympic medalist took the opportunity in the softer snow conditions to do a jump in her final run that she has only done a few times before, moving her to a higher degree of difficulty level and helping to propel her onto the podium. “It went super well. I’m just so happy about my skiing, it really felt like what we saw today was the real Justine, the real skiing that I can give out there, so I feel proud”, Justine explained. She went on to state that “whatever the colour of the medal, this is what I want to do. I want to perform 100% like I did, give my best, show my biggest tricks, like a cork and back truck driver so it’s a big success today. I feel like it’s opening my mind that I can do it. I can do it again and even better.” Dufour-Lapointe was thankful for the fans’ support on Canadian soil: “It’s a great gift to also have been able to do it in front of my Canadian fans, they are always cheering. Being able to hear them when I’m skiing, because I do! It’s really special. It gives me more power to give it all.”

Rounding out the Women’s top 3 were perennial podium contenders Yuliya Galysheva, from Kazakhstan, who finished 2nd with Perrine Laffont, from France, taking the gold medal.

The weather added a layer of challenge for the athletes today, as stormy, rainy conditions, fog and high winds delayed the competition. However, Dufour-Lapointe was determined to not let the difficult conditions affect her skiing: “Despite the weather, you don’t have a choice. Absolutely not. If you want to jump on that podium, you have to give it all, even though it’s raining, or foggy, or windy.”

Maia Schwinghammer, 18, took 13th place in her 4th World Cup final. She was pleased with her performance, and thanked her family for being on site to support her and cheer her on: “It’s my second time competing in Calgary, and one of my favourite events. Every year, my family comes and supports me, the whole Schwinghammer crew is here and I think it pushes me to ski harder and do my best even more than I have before. It’s so good being here.”

On the men’s side, Mikaël Kingsbury stood on top of the podium for the 9th time in Calgary also racking up his 60th World Cup victory. He was joined by Swedish athlete Walter Wallberg (silver) and Dmitriy Reikherd, from Kazakhstan (bronze).

Japan’s Ikuma Horishima, Kingsbury’s noted rival who won the qualifications, made some small mistakes in his final run clearing the way for Kingsbury. Kingsbury responded with an almost flawless run to secure the victory. Kingsbury noted he had to look past the weather conditions and embrace the unknown: “Changed course, changed lines. It was just so much fun skiing today, even though we got a little weather hold, it was so much fun.” He spoke highly of the Calgary venue and crowd: “I love this course, I like coming here.”

The Canadian team is off to Deer Valley, UT, for the Intermountain Healthcare Freestyle International Ski World Cup, Feb. 7-8.