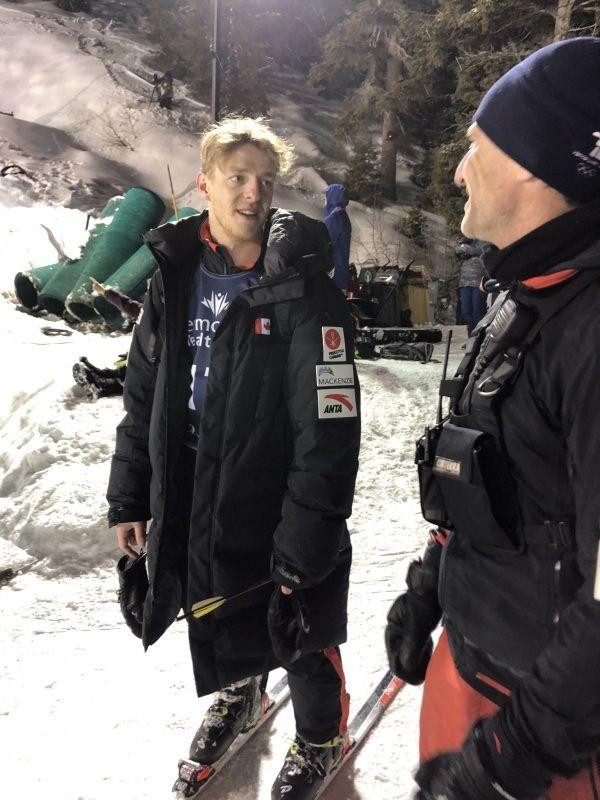 Deer Valley, UT, February 7, 2020 – Canadian athletes had a strong initial showing in aerials at the Intermountain Healthcare Freestyle International Ski World Cup in Deer Valley, UT, today, though struggled with landings in the finals. On the women’s side, veteran Catrine Lavallée did a full full (double twisting double flip) and qualified 6th. She was excited for tonight’s finals, and walked away with an 8th place finish.

RBC Training Ground athlete Marion Thénault was jumping in her first World Cup in her first year of performing double flips on snow. She did a straight full full, but was a little short in rotation, as well as did a punch front flip. She handled the excitement of her first World Cup well and we look forward to seeing her jump here in Utah next week at the North American Cup. Thénault’s coach, Rémi Bélanger, was extremely pleased with her performance: “Marion did super well. She didn’t have the result that she wanted in competition, but it was such a good experience for her”, he explained. He went on to state that “Her jump contest was so good, but at the end she should have absorbed a little bit more and she would have been in the final, for sure. Overall, it’s a very good experience for her and I’m happy that she lived it this year.”

On the men’s side, Félix Cormier-Boucher was first to start in the men’s qualifying and set a great start for the team, landing his first quad twisting triple flip in competition and scoring over 121 points. His jump was good enough to land him in 4th place for the 12-person final. It looked like Felix had a good jump going in the superfinal but when he came around on this third flip he was short on rotation and caught one foot resulting in a one-footed tumble into the flats. He knew he had the skills to vie for a medal, and he is gaining experience in how to land these difficult jumps. His last jump resulted in a 10th place finish.

His friend and teammate Lewis Irving finished directly behind him, in 11th place, after landing a quad twist and placing 8th in the qualifying round. Skiers soar into the 4m jump over 66 km/h so there is no room for error. Unfortunately, Lewis also had a great jump going but landed a little soft and sunk into the landing hill. Lewis landed seven of eight jumps today, but he would have rather missed one in training than finals.

Three time Olympian, Canadian team coach Jeff Bean felt that it’s time for the team to step up in finals too. “All three have shown they have the skills to take on the world’s best as well as the consistency to land. We know they can make finals, now they need to believe they can land jumps in finals and end up on the podium”, said Bean.

A bright note to the disappointment of the National team skiers was with NextGen skier was Miha Fontaine, 16, who jumped in his first individual World Cup and scored 99.84 points doing a difficult quad twisting double flip. Competing against veterans who have been doing triple flips for years, Fontaine just missed the final, placing 13th. This was his second competition on this course, under the watchful eye of his coach and father, legendary Canadian jumper Nicolas Fontaine, the head coach of the Quebec aerials ski team. Miha’s first experience on the Deer Valley course had been competing in the team event at the 2019 World Championships when Lewis Irving was unable to participate due to injury.

It was also a big day for a number of other young aerialists from Nicolas Fontaine’s program. Freestyle Canada wanted to give the younger athletes their first experience in the World Cup as they have shown great talent in the NorAm tour.

The Canadian athletes competed in the December Utah NorAm and used their top two jumps to qualify. The three skiers who joined Miha Fontaine were Nicholas Martineau (21), Émile Nadeau (17) and Evan Dermott (26). The young skiers will stay in Utah next week to compete in the second NorAm stop of the year while the national team heads to Moscow.