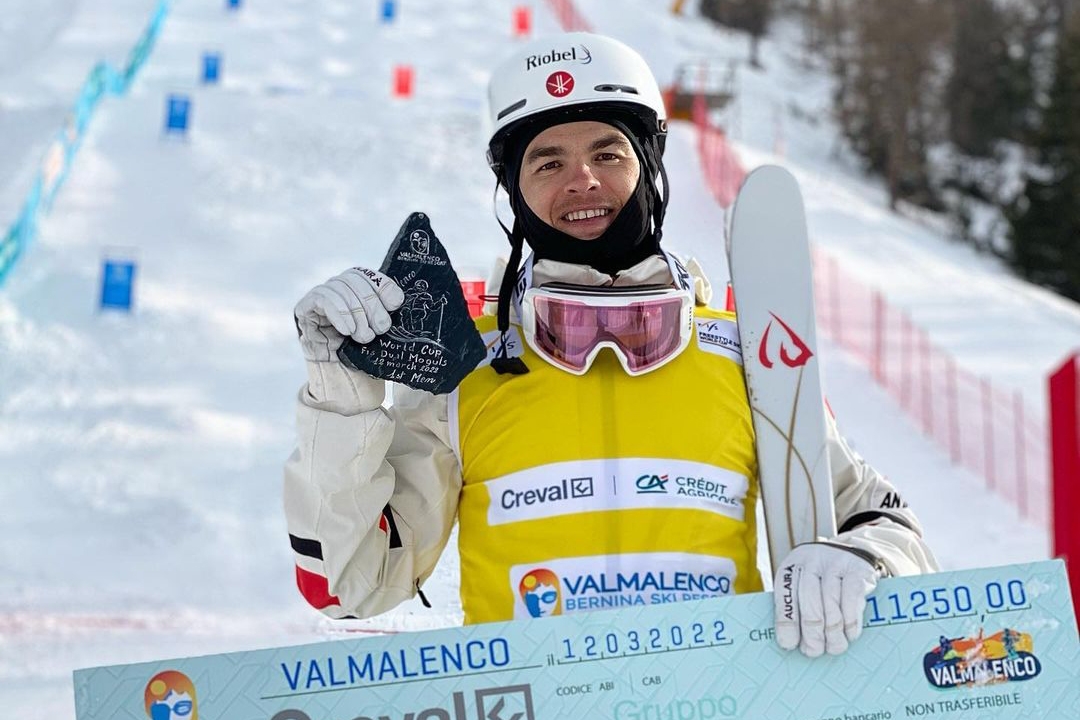 Mikaël Kingsbury performed brilliantly on Saturday at the Chiesa World Cup in Valmalenco, Italy. True to form, the Canadian left his opponents in the dust in the men’s dual moguls event, capping off his day with a gold medal victory over Japan’s Ikuma Horishima.

Kingsbury, who was competing for the first time since his silver medal performance at the Beijing Olympic Games, made it look easy, as usual. And this time, he made sure to finish his day at the top of the podium, where he has stood so frequently.

The skier from Deux-Montagnes, QC, got off to a great start on Saturday, beating Switzerland’s Marco Tade, Finland’s Jimi Salonen and Sweden’s Ludvig Fjallstrom in early runs.

In the big final, the moguls “King” went head-to-head with his longstanding rival, Ikuma Horishima. However, the race did not go as planned for Horishima, who suffered a bad fall on his first jump. Kingsbury went on to win the 72nd race of his career before quickly turning around to check on his opponent.

It took the visibly shaken Horishima several seconds to get back up and make his way to the bottom of the course, where he stepped onto the podium along with Kingsbury and Sweden’s Walter Wallberg, the reigning Olympic champion and today’s bronze medallist.

“It feels great to win today, especially after the Olympics and the break that followed. This is not my favourite type of course, especially with the smaller bumps, but I managed to do well and I’m very happy,” stated Kingsbury after the competition.

Thanks to today’s victory, the Canadian remains at the top of the overall moguls standings with 872 points, 92 ahead of Horishima, who sits in second place.

Also in action in the men’s event on Saturday were Gabriel Dufresne (Joliette, QC), Elliot Vaillancourt (Drummondville, QC), Alexandre Lavoie (Lac-Beauport, QC), Brenden Kelly (Pemberton, BC) and Jordan Kober (Penticton, BC), who were all eliminated in the round of 32.

In the women’s event, Canadians Maia Schwinghammer (Saskatoon, SK) and Sofiane Gagnon (Whistler, BC) raced each other in the first elimination round. Schwinghammer beat her countrymate and advanced to the quarter-final, where she was defeated by Jakara Anthony of Australia, who went on to win the gold medal in the super final against Perrine Laffont of France. Jaelin Kauf of the USA rounded out the podium after defeating her teammate Kai Owens in the small final. Gagnon finished ninth.

Valérie Gilbert of Sainte-Adèle, Quebec was the only other Canadian to advance to the round of sixteen. However, she lost her race against Tess Johnson of the USA and finished 14th.

Laurianne Desmarais-Gilbert (Sainte-Adèle, QC) and Berkley Brown (Aurora, ON) both lost their first races of the day and finished 17th and 20th, respectively.

The skiers will conclude the World Cup season next weekend in Megève, France, where single and dual moguls events are scheduled for March 18 and 19. Kingsbury, who has his sights set on a tenth crystal globe, will put the final touches on another great season.